SATURDAY HEADLINES:
The expert criticized Zelensky for jokes about Ukrainians.  Heraschenko demands to bring a criminal case against Zelensky.  Russian rocket ships carried out firing in the Black Sea.  Russian propaganda called the date of a "referendum" on the accession of Belarus to the Russian Federation.  An ex-head of the FSB, who was implicated in the murder of Putin's enemy, died in Russia.

The expert criticized Zelensky for jokes over Ukrainians

The expert criticized Zelensky for jokes over Ukrainians
Political expert Oleksiy Holobutsky said that the presidential candidate Volodymyr Zelensky humiliated Ukrainians by jokes about the Maidan and the war.

At the same time, according to Golobutsky, Ukrainians can laugh at themselves, they have won this right in battle.

" That is, Ukrainians may be kidding about themselves - we have won this right by blood, but when the presidential candidate is joking with the many thousands of victims of the people who wants to head, this is already a frank humiliation: humiliation of Ukraine - but even more humiliating people. It was very difficult to give these five years: refugees and fighters, widows and mothers, migrant workers and pensioners ... Ukrainians are joking, Ukrainians are holding - but this is definitely not an occasion to mock them and their losses", - said Golobutsky.

An expert believes that abusing a people for a presidential candidate is abnormal.

Geraschenko demands to bring a criminal case against Zelensky

The Vice-Speaker appealed to the Minister of Internal Affairs Arsen Avakov to institute a criminal case due to the discrimination of people with special needs in the movie "Servant of the people-3".

"It's been 24 hours: neither Zelensky's candidate, nor his headquarters, nor his studio" Quarter", nor his screenwriters have apologized to people with disabilities. I believe that the ideology and language of hatred, discrimination of people with disabilities rejects us from the path of integration into the EU and NATO. , because the key principles of these institutions and member states are respect for human rights, tolerance,"- said Gerashchenko.

She noted that in the series "Servant of the people-3" the words "down", "debil", "oligophrenia" are often used.

Parents of "children of the sun" together with Gerashchenko also intend to address the National Council on Television and Radio Broadcasting, the Ministry of Justice and the Verkhovna Rada for Human Rights, Ludmila Denisova.

Russian rocket ships carried out firing in the Black Sea

Russian rocket ships carried out firing in the Black Sea 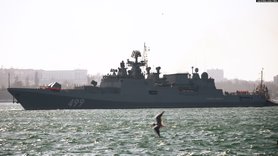 A group of ships of the Black Sea Fleet of the Navy of the Russian Federation carried out rocket firing in the Black Sea area and returned to the base station - in the occupied Sevastopol.

This is reported by censor.NET with reference to "Radio Liberty".

In addition to missiles "Ivanovets" and "P-60", which directly carried out rocket firing, 14 ships and vessels providing the Black Sea Fleet returned to the points of permanent disposition. They participated in the closure of the maritime polygon to ensure the safety of civil shipping.

An ex-head of the FSB, who was implicated in the murder of Putin's enemy Litvinienko, died in Russia

An ex-head of the FSB, who was implicated in the murder of Putin's enemy Litvinienko, died in Russia
In Russia, on the 70th year of his life, died the deputy of the State Duma and former director of the FSB of Russia, General Nikolai Kovalev, who was involved in the scandal with the poisoning of former FSB officer Alexander Litvinenko.

According to Russian mass media, Geral died after a long illness.

Kovalev served as head of the FSB from 1996 to 1998. Recently, he was a member of the State Duma Committee on Security and Counteraction to Corruption and head of the Russian delegation to the OSCE Parliamentary Assembly.

The general is awarded with many state awards, including the Orders for Merits to the Fatherland III and IV degrees, "For military merits," the Order of the Red Star and the Order of Honor.

It is known that on November 17, 1998 former FSB officers, including Lieutenant Colonel Alexander Litvinenko, held a press conference in the Interfax building. They stated that the higher authorities had ordered them to kill Boris Berezovsky and that, according to them, such an ugliness had begun in the FSB with the arrival of Kovalev.

In November 2006, Litvinenko died in London as a result of poisoning with radiation polonium.

As reported by the "Apostrophe", the network appeared on the network information about the death on the Donbas, Russian Federal Police Colonel Roman Komissarov with a call "Moon".

Countries of the G-7 warned Russia about new sanctions

This is stated in a communiqué published on the results of a meeting of the G7 Foreign Ministers in the French Dinar, reports Ukrinform.

"It will be recalled that the period of validity of economic sanctions is entirely due to Russia's full compliance with its obligations under the Minsk Agreements. These sanctions can only be lifted if Russia actually fulfills these obligations, but we are also prepared to adopt additional restrictive measures if Russia's actions so require, "the document said.