SATURDAY HEADLINES:
Prosecutors in the United States require 18 months in jail for the Russian spies accused of Butin.  Will make Russia pay: the US made a sharp statement about the Kremlin's intervention in the elections.  In the West, they explained what to expect of Ukrainians in the event of the election of President Zelensky.  The Russian Orthodox Church made an attack against the Patriarch of Constantinople across Ukraine.  Lukashenko has made an alarming statement to Ukraine about the war.

In the United States, prosecutors have been recommending to sentenced Russian prisoner Maria Butine to 18 months in prison, who is accused of espionage.

According to CNN, with reference to court documents, the preliminary prosecutor's report states that Russian activities were part of a wider Russian scheme for obtaining information and establishing ties that could be used in favor of the Russian Federation, Censor.NET with reference to the Public.

According to prosecutors, Butina was not a traditional spy or "trained spy", but sought to help Russia at the expense of national security in the United States.

The Russian report is called "access agent", which is used by a foreign government to create channels of communication and diplomacy through republican organizations.

"If it succeeded, the risks to the United States would be to the detriment of the political processes in the country, internal government relations and American foreign policy interests," prosecutors said.

The sentence should be announced next Friday.

For his part, Butina asked the federal judge to release her from prison and deport to the Russian Federation.

Recall 29-year-old Butin detained July 15, 2018 in Washington. According to the investigation, starting from 2015 and at least until February 2017, she acted in the United States as an agent, following the instructions of the Russian high-ranking official. According to The Washington Post, Butina set up trust relationships with the members of the National Rifle Association (NRA) and other organizations to promote the interests of the Russian Federation.

According to Vadim Labass analyst, Butina also participated in the occupation of the Crimea, and then joined the project "Novorossiia" - used its influence among certain groups of the population and called for the support of terrorists in eastern Ukraine.

In mid-December 2018, it turned out that Butina began to collaborate with the investigation and agreed with the prosecution's version, according to which she was trying to establish a network of contacts at the National Infantry Association of the United States (NSA). This organization is one of the main sponsors of the Republican Party.

The Russian woman said she was ready to talk about a "US citizen with whom he had conspiracy" to establish ties in American political circles, as well as a "Russian official" who, according to her, was directing her actions.

The said official is former deputy chairman of the National Bank of Russia and former deputy speaker of the Federation Council Alexander Torshin, whose assistant has been Putin for several years. The American, reported by Butin's investigator, is the activist of the Republican Party of South Dakota, Paul Erickson.

Instead, the US Immigration and Customs Service said it was ready to comply with the decision to deport Butina, as soon as it received it.

Driscoll hopes that thanks to the collaboration with Butin's investigation, he will receive a small prison term - given the time she has already spent in the detention facility, this will allow her to be deported almost immediately.

Will make Russia pay: the US made a sharp statement about the Kremlin's intervention in the elections

Will make Russia pay: the US made a sharp statement about the Kremlin's intervention in the elections
US Secretary of State Mike Pompeo said the United States would force Russia to pay compensation if it intervened in America's internal affairs.

He answered the question of whether Washington will discuss Robert Muller's report on Russia's interference with the US presidential election in 2016. Pompeio said that Russia intervened in internal affairs of different countries.

"The most recent case is in Venezuela. The impact on Ukraine ... The work of (Russia) to intervene in elections throughout the world, not only in ours in 2016, but also in others, was serious. It was a serious interference," - said Pompeo.

He noted that during the course of communicating with the Russian administration he would point out the inadmissibility of such actions.

"We will be talking about a constant demand for Russia: to abandon the actions that hinder the success of our democracy, the interference in our election has created risks, we will clearly point out to them that such behavior is unacceptable, and we will take rigorous measures that will force Russia to pay a higher price for their hostile actions, "said the US Secretary of State.

As reported by the "Apostrophe", a bill on new sanctions against Russia appeared aimed at deterring the Kremlin from interfering in the US elections.

In the West, they explained what to expect of Ukrainians in the event of the election of President Zelensky

In the West, they explained what to expect of Ukrainians in the event of the election of President Zelensky
The danger of Vladimir Zelensky's presidency lies in the fact that he can negotiate with Russian President Vladimir Putin without any far-sighted plan.

Andrew Wilson, senior research fellow at the European Council on Foreign Relations (ECFR), said this opinion in an interview with the "apostrophe".

"Rational expectation is a huge risk, and Zelensky is definitely not dumb, it's not Trump, so it's likely that he'll be on the job and even succeed, hardly he has gone to it to fail." The biggest risk is that he will somewhat naive, he will not be flying on the first day of his post in Moscow to embrace Putin, but some naivety is possible, and he can pay more attention to domestic affairs in Ukraine. I will say like a Briton: one of Brexit's lessons is that we should not start negotiations without plan. Just to negotiate Putin us - it's not a plan,"- said he.

In addition, according to the expert, one should also take into account the reaction of "key players in Ukraine".

"Russia wants Ukraine to be weak, which will depend on how the key players in Ukraine will react to the victory of Zelensky, or they will support it, so it depends not only on Zelensky and his team," added Wilson.

This was stated by Volodymyr Legoida, chairman of the Moscow Patriarchate's Synodal Department on Church-Church Relations with the Society and the Media on his Telegram Channel.

In particular, he commented on "the call from the Alexandria, Antioch, Jerusalem and the Cyprus Orthodox Churches to protect the temples of the canonical Ukrainian church from enthusiasm."

According to the Russian Orthodox Church, the statement of the four Orthodox churches allegedly demonstrates that the Patriarchate of Constantinople "loses its authority in the Orthodox world, losing the opportunity to express the general will and to be" the first among equal".

Lukashenko has made an alarming statement to Ukraine about the war

Lukashenko has made an alarming statement to Ukraine about the war 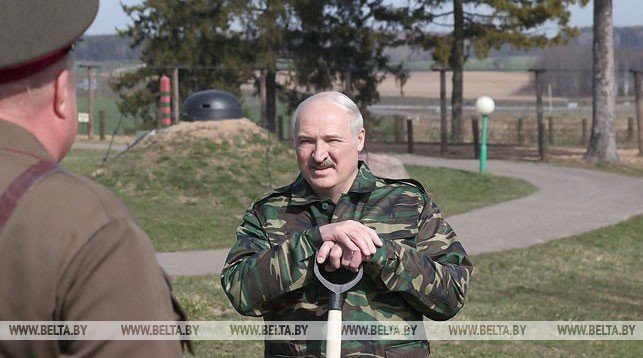 President of Belarus Alexander Lukashenko said that "God forbid, something will happen", citizens of his country will be together with the Russians in some trenches.

He said this during Saturday afternoon on April 20 in connection with the reaction of a number of politicians in the Russian Federation to the words about Belarusian sovereignty.

Lukashenka said that one who dares to destroy Belarus, whether it be a president or a government, will be cursed by the Belarusian people, and who dares to do so by force - will receive a powerful rebuff.

"Some politicians are in vain, especially in Russia. I got all this information: ah, it's against Russia. These phrases were directed against those who try to do this, firstly. Secondly, as far as I understand, I sincerely say, Russia is, say, a stronghold and our sovereignty. God forbid, something happens, I still think that we will be in the trenches together with Russia. Therefore, one should not suffer some politicians in Russia and take these phrases here, as as if they were addressed to Russia ", - underlined Lukashenka.