SATURDAY HEADLINES:
The United States is about to impose new sanctions on Violence Poison against Russia.  Russia prepares for hackers attack on popular Internet resources and mass media in Ukraine.  Three NATO vessels enter Black Sea. Russian guard escorts them.  NATO will build a depot for American military equipment in Poland.  McCain's widow flies to Kyiv: she will be an observer in the elections.  The SBU's counterintelligence disclosed an attempt by Russian intelligence services to use the Ukrainian security forces to perform spyware tasks.  Poroshenko announced a new procurement of weapons in the US.  The State of Louisiana issued a proclamation on the Holodomor of 1932-33 in Ukraine, the Ukrainian Embassy in the United States. 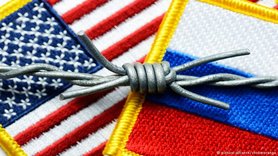 The United States is about to punish Russia for the poisoning of former Colonel GRU Sergei Skripal and his daughter Julia by introducing additional sanctions.

This is with reference to sources, writes the publication Bloomberg, reports Censor.NET.

According to journalists, the draft of new sanctions has already been approved by the Department of State and the US Department of the Treasury. Now we need the final decision of the White House. This information has been verified by two independent sources.

What restrictions can be imposed and whom they will touch, is unknown, Bloomberg notes. One of the sources argues that new measures may affect the banking sector of Russia.

The news about the introduction of new sanctions accelerated the fall of the ruble against the dollar and the euro.

Recall that the first package of sanctions against Russia for the poisoning of Sergei and Julia American filmmakers introduced on August 27, 2018. At that time, sanctions were imposed against the Russian Federation as a whole and did not directly affect Russian businessmen and officials, as well as companies from the Russian Federation. At the same time, Washington was warned that if Russia does not let international inspectors to plants that produce chemical weapons, a second, more rigorous package of sanctions will be introduced. The term granted to Moscow expired in November 2018.

Former Colonel-General of the GRU, Serhiy Skripal, resident of the UK, was convicted in 2006 for espionage in favor of British intelligence services and his daughter Julia was injured on March 5, 2018, as a result of poisoning with an unknown substance at the Salisbury shopping mall.

The British government came to the conclusion that the responsibility for poisoning in Salisbury, a former employee of the GRU, Sergei Skryptal and his daughter, most likely, lies in Russia. She also said that the victims were poisoned by the nerve-paralytic substance "Novachok", which was developed in the Russian Federation. 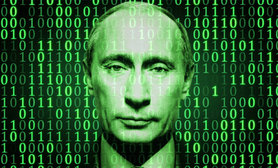 The Security Service of Ukraine managed to prevent a hacker attack on Ukrainian information and telecommunication objects. The attack should have been conducted by a group of hackers, controlled by Russian special services.

Performers were preparing to attack for several months, reports Censor.NET with reference to the press center of the SBU. During this time, they created dozens of domains, the names of which were similar to the domains of popular Ukrainian media.

Accounts that were used when creating these domains were previously used for last year's attacks on the Ukrainian state sector, according to the SBU.

"The plan of a cyberattack, it is likely, was to create maximum public resonance and negative informational influence on the eve of the election of the President of Ukraine," the special service said.

Employees of the Situational Center for Securing Cybersecurity SBU informed all media outlets that were forged about a planned cyberattack.

"To preserve the image of these media and organizations, the SBU does not publish a complete list of domains of detected criminal infrastructure," the statement said. 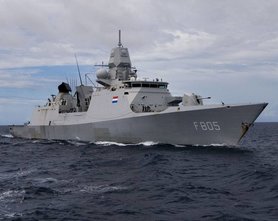 "The forces and facilities of the Black Sea Fleet took to escort a group of NATO ships that entered the Black Sea water area and consist of three frigates with guided missile weapons of the Navy of the Netherlands, Canada and Spain," the report said. The observation is carried out by the ships of the Russian Navy "Ivan Khurs" and "Vasily Bykov".

A group of three NATO warships entered the Black Sea on March 28.

Two vessels from the line-up of NATO Standing Navy Maritime Group 2 entered the Black Sea waters; Toronto, the frigate of the Royal Navy of Canada, and Santa Maria, the Spanish Navy frigate', reads the message. Dutch destroyer Evertsen joined the company, too.

The ships will enter the seaport of Odesa on April 1. The commanders of the vessels will meet with the military of Ukraine’s Armed Forces including Ukraine’s Navy and the representatives of the local authority during their stay in Odesa.

NATO will build a depot for American military equipment in Poland

NATO will build a depot for American military equipment in Poland 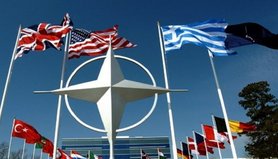 The depot will become the largest ever NATO construction project. It will store US military equipment.

NATO reaffirmed plans to build warehouses for the placement of American armored vehicles, weapons and ammunition in Poland, the number of which would be sufficient for armament of the whole brigade in the event of an increased threat of confrontation with Russia. This is Censor.NET reports with reference to Radio Liberty.

Plans for construction existed for a long time. In 2018, the US Army Land Forces published a request for services to cut down forests at an area of ​​38 acres around the base.

Funding will come from the NATO Investment Program (NSIP). The program receives funds from contributions from 29 member countries, the amount of which is determined depending on the size of the country's economy.

NATO Secretary General Jens Stoltenberg, in an interview with The Wall Street Journal earlier on March 23, already confirmed plans to build warehouses at an airbase west of Warsaw.

According to Stoltenberg, the construction of warehouses should "highlight the fact that the US presence in Poland has increased."

Construction will cost about $ 260 million. Construction work will begin in the summer of 2019 and will last for about two years. The decision was made to strengthen the NATO presence on the eastern flank in response to Russia's annexation of the Ukrainian Crimea and armed confrontation in the Donbass, AFP said.

McCain's widow flies to Kyiv: she will be an observer in the elections

McCain's widow flies to Kyiv: she will be an observer in the elections

Cindy McCain, the widow of American senator John McCain, wants to continue the work of her deceased husband, supporting Ukraine.

John McCain's widow arrived in Ukraine as part of a delegation from the International Republican Institute (IRI) and the McCain Institute of the University of Arizona. This is Censor.NET reports with a link to Liga.Net.

She wrote on Twitter that she wants to show respect for her husband's heritage in this way.

"I can not think of a better way to respect her husband's heritage than to demonstrate continued support for freedom in a country that my husband deeply cares about. I am proud to be part of the mission of the International Republican Institute in the elections in Ukraine," McCain wrote.

Censor.NET was informed about it by SBU counterintelligence.

The statement states: "It was established that the FSB officers of the Russian Federation recruited a former Ukrainian security guard, a citizen of Ukraine,"H", who worked out the task of collecting and transferring to the foreign party for monetary remuneration the relevant information about the socio-political situation in Ukraine, the places of dislocation, the routes of movement, the state the combat readiness of the Armed Forces of Ukraine in the border regions, as well as the search and study of pro-Russian-minded military and law-enforcers.

The recruitment of our compatriot was carried out during a visit to the territory of the Rostov region by the RF FSB RF Sergei Moroz as a result of artificially created representatives of the Russian intelligence service a compromising situation.

Counter-intelligence also found that a citizen of Ukraine at different times was on an official communications between FSB officers Sotnikova Yuri Yuriyovych and Korniliev Ivan Volodymyrovych.

In the future, he was tasked to steal and send to the territory of the RF officer of the Security Service of Ukraine or military intelligence.

In order to force them to perform reconnaissance and subversion tasks, FSB officers of the Russian Federation used physical and psychological pressure, threats against family members, illegal deprivation of liberty, etc. to our fellow countryman.

In addition, because of torture, a citizen of Ukraine was forced to admit himself to the camera "Ukrainian spy".

At present, measures provided for by law in the framework of criminal proceedings under Art. 111 ("State betrayal") of the Criminal Code of Ukraine".

Poroshenko announced a new procurement of weapons in the US

Poroshenko announced a new procurement of weapons in the US 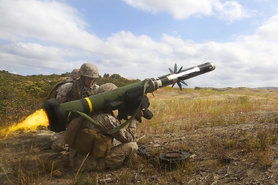 President Petro Poroshenko announced a new purchase of modern weapons in the United States.
As censor.NET reports, he said this in an interview with the ICTV channel.

"It was in this room (the Presidential Administration's Situation Center) negotiations on the supply of Javelin to Ukraine were completed. We are also planning to expand this cooperation now, and additional modern equipment will be procured, including from the US," Poroshenko said.

At the end of 2017, US President Donald Trump's administration decided to sell lethal weapons to Ukraine, including Javelin anti-tank missile systems.

The State of Louisiana issued a proclamation on the Holodomor of 1932-33 in Ukraine, the Ukrainian Embassy in the United States. DOCUMENT

censor.NET informs about this, citing the Facebook page of the Embassy of Ukraine in the United States.

"Following more than a dozen US states, Louis John's Governor John Bell Edwards issued a proclamation on the 85th anniversary of the Holodomor of 1932-1933 in Ukraine. A special proclamation refers to the laws of Ukraine on the recognition of the Holodomor as a genocide of the Ukrainian people and the relevant US legislation," reads message. 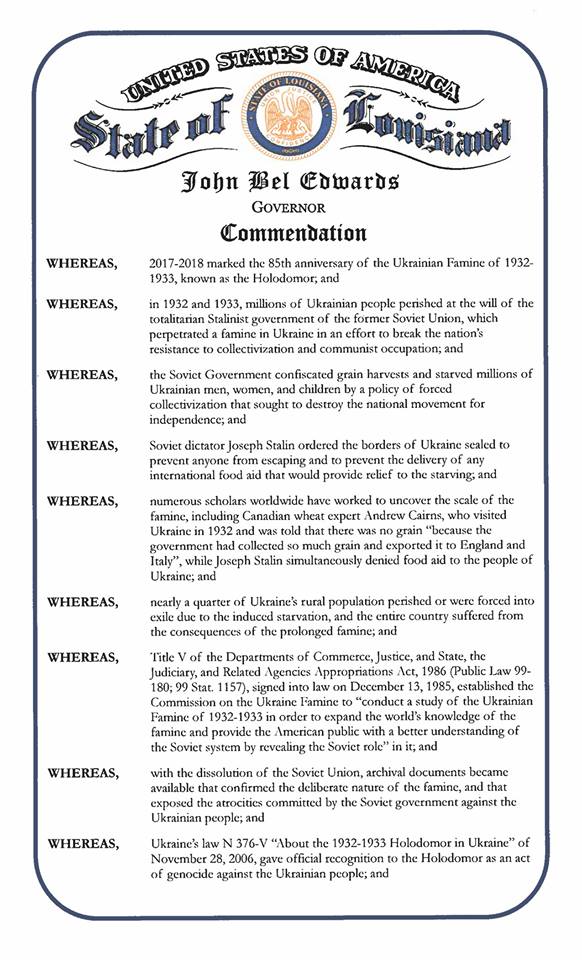 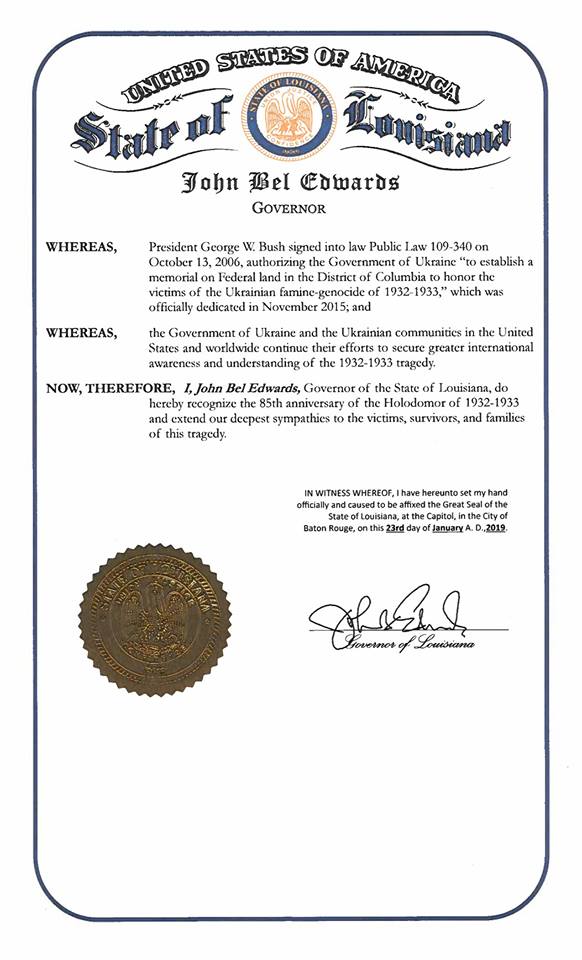